What is the Opposite of Beauty?

What is the opposite of beauty?
Ugly? Unsightly?

I grew up feeling beautiful. They say beauty is in the eye of the beholder. I’m sure that I wasn’t as beautiful as I felt, but a healthy dose of self-confidence can be very attractive, mixed in with a certain amount of personal style, an obvious joy of life and an easy and open laugh and smile. These qualities can make a mildly attractive woman into a more desirable one. For most of my teens and adulthood, I enjoyed the perks of being a somewhat alluring woman.

What happens when that same woman is truly sick and unable to advocate for herself in a life and death situation … where even her medical evaluation and subsequent treatment and care is based almost solely on her appearance?

What happens when that same woman who felt like an invincible creature gets literally and irreparably physically and emotionally torn apart?

If she’s strong, determined and truly owns her inner beauty, she can channel that through the worst nightmare imaginable.

I have had a front row seat to both ends of the equation — from beautiful to frightening and unsightly in a short period of time. In a matter of months I had gone from a head-turning woman to a person who people were terrified to look at. One nervous man told me I looked like Anthony Perkins’ dead mother in the Alfred Hitchcock thriller “Psycho.” I’ve been given better compliments in my day, that’s for sure.

My transformation began with a rare bacteria that went viral in my bloodstream and became Toxic and Septic Shock.

Sitting in my wheelchair, I would look at people straight in the eye, willing them to see the real ME — the beauty that I felt I was on the inside. Often people would respond with kindness and respect rather than pity, which was very important to me.  I appreciated being respected rather than pitied.

My short term goal was to free myself permanently from my wheelchair. I felt lucky that was an option for me … To say that living your life in a wheelchair is humbling and exhausting is a gross understatement. Many wonderful people who I have met and admire live  permanently in a wheelchair; and many of them lead full productive lives and are doing very well.

My friend Tony has said that you can’t control the cards that are dealt, but you can play your hand to the best of your ability. I like this analogy and believe in its wisdom.

After a long, arduous uphill battle to reclaim my health, I took stock of my life. I needed to make adjustments that were necessary to my comfort and, in some cases, to my very survival. I made some tough decisions that I felt would ultimately provide me with a happiness that had been lost.

One year ago, five years after my incident with TSS, I filed for divorce from my husband of 16 years. While I do not want to disclose the details of that decision, I will say that I had to garner a large amount of courage: Leaving a marriage for the unknown is never easy; leaving your husband after you have suffered severe permanent disabilities is nothing short of daunting.

To say that this was a difficult task is an understatement.

It takes two people to make a marriage work and two people to make it ultimately fail. I believe that I had excellent reasons to leave my marriage although I struggled with the pain it caused my children. Unfortunately, our marriage was another fatality from my Toxic Shock incident those years ago. 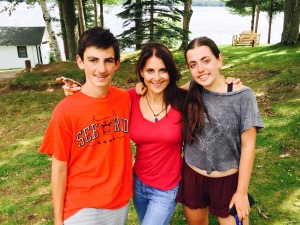 Now, one year after our separation, I feel reborn. I am my best self, and I am truly happy that I took the path that was best for the long term. I have been able to reclaim my joy of life. It was a risk but one I am grateful that I took.

The message I would like to convey to other women out there grappling with similarly weighty decisions is this: I hope you draw upon your own personal strengths. Trust yourself. Love yourself. Honor your inner voice. For your real inner voice will honor you if you let it.

One response to “What is the Opposite of Beauty?”