I was laid out flat in my hospital bed, just days after coming out of a three-month coma, when I heard a familiar, wonderfully crass voice urging me to rejoin the living.

“Penny! Did you notice I lost 15 pounds on SlimFast?” Jackie Derchact shouted from across my room in the ICU.

Can’t say that I have.

Jackie Eisenberg had been parked at my bedside for a while I guess, gently caressing my arm and humming softly to me. We were both jolted by Jackie Dercacht’s invasion of our space, but that was just Jackie being Jackie, a loving, caring friend I have l 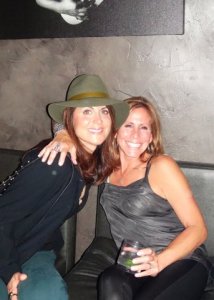 oved for a long time.

I tried to enjoy her new appearance but since I was still suffering from diminished eyesight and was seeing double, I couldn’t really appreciate Jackie’s new body. She either looked twice as big as I remembered or her new slim version just kept shifting in front of me. I tried to keep my eyes open and enter some level of jovial consciousness, but as Jackie Eisenberg continued holding my hand, I fell quickly back to sleep.

The next day––I think––I was awakened by a loud, clomping noise coming from the corridor, seemingly edging closer to my room with each labored breath I took.

That must be Christina.

Imagine, after being in a deep slumber for three months I could still recognize Christina’s footwork in a hospital filled with hundreds of visitors and sounds. As Christina entered the room, my eyes detected a shiny glimmer of gold. In all that time, my eyes had barely seen a ray of light.

“Oh, these are my new Tory Burch shoes! “ Christina said, as if we were meeting in a shopping mall. “Aren’t they cute?” 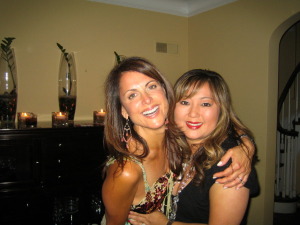 She held up a six-inch heel for my review.

“Is that what you wear to a hospital on a Sunday afternoon?” I croaked, still quite hoarse from not having spoken since what felt like forever.

Christina started to shake, which she always does when a laugh is beginning in her belly. She is another of my absolute best friends, a character and a riot to be around.

Then Jackie Eisenberg walked in.

“Did Jackie Dercacht really wake me from the dead to ask if I noticed her 15 pound weight loss?”

Jackie nodded, and the three of us erupted in laughter. Well, I didn’t exactly erupt. I must have whimpered and tried to maintain a smile.

I thanked God for that moment––and still do––even though Jackie and Christina shared how they were afraid that I would never laugh again. I had not yet shown any emotion since my re-entry to earth, nothing happy or sad or in between, because I was still in such shock and disbelief that I even existed.

But this laughter, this beautiful, recognizable laughter in my hospital room broke the spell and I began to feel hope.

So thank you my dear friends for your eccentric, ridiculous, and colorful personalities––then and now. I appreciate you with all my heart!